Forte Piano - Forte Piano Cylinder Box
This is a plain fruitwood box. It contains a beautiful and expressive forte piano musical movement and dates from around 1850 give or take. It plays six operatic airs by Donizetti and Bellini.

Disc Room - The disc musical box, like the cylinder musical box, sounds its melody and accompaniment on tuned steel teeth in a comb. The teeth are plucked by the points of star wheels. The star wheels are turned by the force of projections on the underside of steel or zinc discs. The projections are arranged to produce a specific tune.
Thorens -
Thorens 'Gramophone'
Table-top Disc Musical Box
This musical box was made by the Herman Thorens Co. in Ste-Croix, Switzerland, around the mid-20th century.
Thorens was recently bought out by the Reuge Co., also of Switzerland. Reuge still manufactures a 4-1/2" disc musical box

Silvanigra
This is a Silvanigra No. 1 disc musical box.
The speed of the music can be changed by adjusting a speed regulator dial, seen in the upper left.


Symphonion
This unassuming wooden box holds a charming single-comb disc musical box. It was made by the Symphonion-Fabrik A.-G. in Leipzig, Germany around 1900.

Kalliope
This box was manufactured by the KalliopeMusikwerke in Leipzig, Germany between 1895 and 1919.

Bell Box
It was manufactured by Polyphon Musikwerke in Leipzig, Germany. Polyphon was one of the 'big three' disc musical box manufacturers that operated between 1885 and 1915 (the other two being Symphonion and Regina).

Capital Cuff
Here is a disc musical box that plays not a flat disc, but rather a 'rolled up' disc in the form of a truncated cone.
It is called a 'Cuff Box' because the shape of the rolled up disc resembles that of a shirt cuff.
This musical box was made by F. G. Otto & Sons, Jersey City, NJ between 1889 and about 1900. 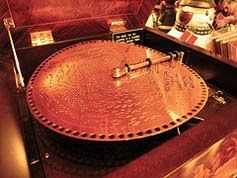 A Porter Music Box brings the splendor of antiquity and the music loved by generations to your home or business in one exquisite piece. Fashioned after the heirlooms of Victorian Europe and America, Porters are world renowned for blending the grace and elegance of fine furnishing with the moving tone and depth of superior musical instruments.
Porters are the largest disc style music boxes in manufacture today, each component handcrafted and assembled in Randolph, Vermont. To control precision and quality, Porter craftsmen finely machine the musical combs and other works in Porter's own shop, using advanced CNC lathes and premium quality tools. This attention to detail is the secret to Porter's trademark sound of multiple octaves and rich harmonic resonance. Encased in beauty, Porter Music Boxes are cradled in cabinets imported exclusively from Italy. Each work of art features intricate inlays of the finest woods.
http ://www.portermusicbox.com/
פורסם על ידי ~BS~ ב- 23:33 אין תגובות: 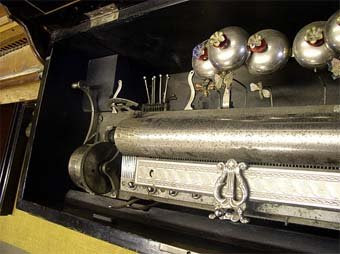 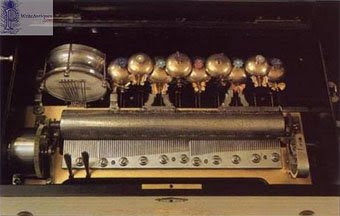 Christopher Proudlove from flickr באדיבות
www .writeantiques.com
A so-called bells-in-sight cylinder music box, the picture showing clearly the comb and pinned cylinder. As the cylinder rotates, it activates small hammers which strike the bells and small drum at left at the appropriate moments. The tunes played on these Swiss boxes are a delightful reward for the collector prepared to spend £400-600 for a basic model 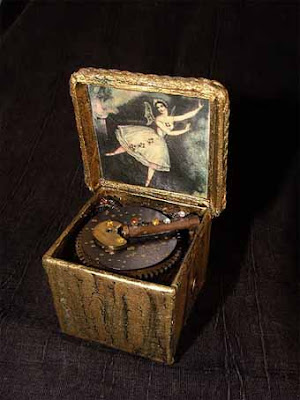 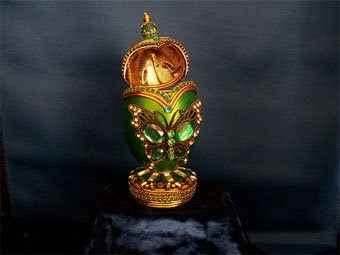 באדיבות mcmakenb's from flickr
Music Boxes: Why We Love Them Music Boxes. There is something about them that appeals to people of all ages. Perhaps it is because they are enchanting, magical, whimsical, and have a tendency to bring back memories of days long past. Play a music box in a room full of people, and everyone will stop to listen. Music boxes never fail to fascinate, captivate, and draw some to the point where they begin to collect them out of sheer enjoyment and love of them.
http ://hobbyproduct.blogspot.com/2008/02/music-boxes-why-we-love-them.html
פורסם על ידי ~BS~ ב- 20:17 אין תגובות: 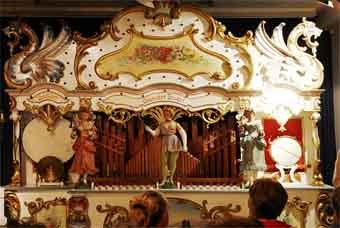 Coin-operated musical boxesIn Switzerland, coin-operated musical boxes, usually capable of playing several tunes, were installed in places such as train stations and amusement parks. Some of the models had a mechanism for automatically changing the metal disks. These were, in a sense, the precursors to jukebox. However, they soon disappeared from their intended venues and were displaced by the jukebox, which could produce a greater variety of sounds.
Because most of the coin-operated musical boxes were built for rough treatment (such as typical slapping and kicking by a disgruntled customer), many of these large models have survived into the 21st century, despite their relatively low production quantities. They are eagerly sought by collectors who have the space for their large or very large cabinets.
מתוך http ://en.wikipedia.org/wiki/Music_box
פורסם על ידי ~BS~ ב- 3:04 אין תגובות: 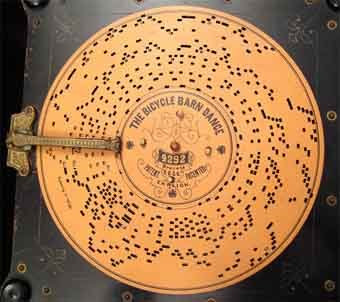 באדיבות DanMud מפליקר
Gustave Brachhausen, who had been involved with the manufacturer of Polyphon disk musical boxes in Germany, sails for America to establish the Regina Music Box Company in New Jersey.Regina, whose boxes are renowned among collectors for their tone, becomes a success and some 100,000 are sold before sales cease in 1921.
פורסם על ידי ~BS~ ב- 21:14 אין תגובות: 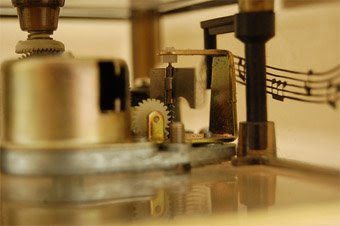 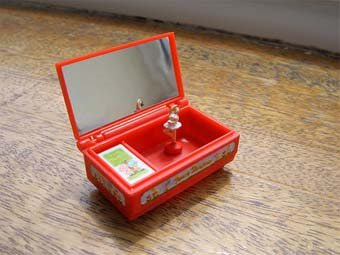 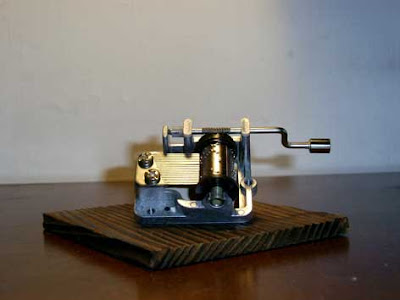 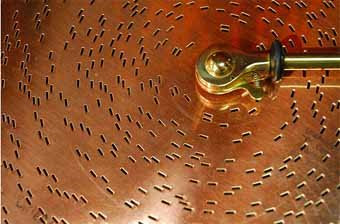 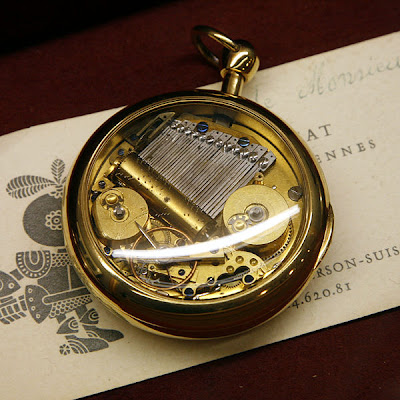 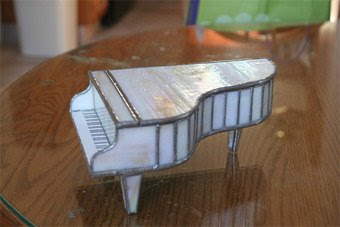 Thorens is a Swiss manufacturer of high-end audio
equipment. They are historically renowned for the range of phonographs
(turntables) they produce. In addition to audio playback equipment, they are
also a historical producer of harmonicas and cigarette lighters, most notably
the button activated automatic lighter.

History
In 1883, the
Thorens family business was first registered in Sainte-Croix (Ste-Croix),
Switzerland. An initial producer of musical boxes and clock movements, they
started producing Edison-type phonographs in 1903. In 1928, they
produced their first electric (motor-drive) record player, and went on to
produce a range of audiophile record players in the 1950s and 1960s which are,
even today, regarded as high-end audio equipment, and are well sought-after. As
of 2006, Thorens continues to produce well-regarded turntables for playback of
vinyl and 78rpm gramophone records. 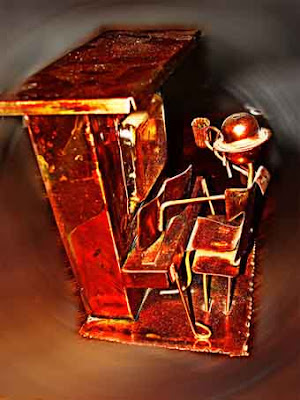 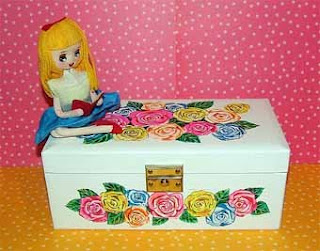 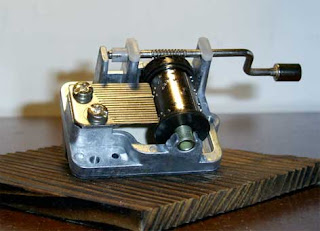