The pipe organ is a musical instrument that produces sound when pressurized air (referred to as wind) is driven through a series of pipes. The admission of wind into the pipes is controlled by a keyboard. A pipe sounds when a key is depressed on the keyboard, allowing wind to pass through the pipe. Modern organs usually include one or more keyboards playable by the hands and one keyboard playable by the feet. Each keyboard controls a certain number of pipes. The smallest portable organs may have only a few dozen pipes and only one keyboard, while the largest organs may feature over 20,000 pipes and seven keyboards. The organ's continuous supply of wind allows it to sustain sound for as long as a key is depressed. This is unlike other keyboard instruments such as the piano and harpsichord, whose sound begins to decay immediately after the key is struck.
The origins of the pipe organ can be traced back to Ancient Greece in the third century BC, making the organ one of the oldest musical instruments. The wind supply was originally created with water pressure; since the second century AD, bellows have been used Early portable organs were used to accompany both sacred and secular music. During the Renaissance period, the organ developed into a complex instrument capable of producing many different timbres and imitating other instruments. By the end of the seventeenth century, the organ was recognisably akin to the modern organ.
Pipe organs are found in churches and synagogues, as well as secular town halls and arts buildings, where they are used for the performance of classical music. The organ boasts a substantial repertoire of both sacred and secular music spanning a period of more than 400 years.

His Master's Voice, today usually abbreviated to HMV, is
a famous trademark in the music business, and for many years was the name of a
large record label. The name was coined in 1899 as the title of a painting of
the Jack Russell Terrier dog Nipper listening to a wind-up gramophone. In the
original painting, the dog was listening to a cylinder phonograph. 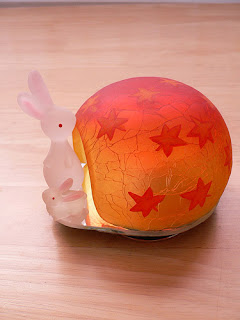 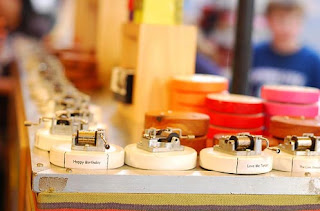 Music Box for sale. I think they cost $10 AUD per box at The Rocks market. They
have a wide range of music to choose from, including "Happy Birthday" song! 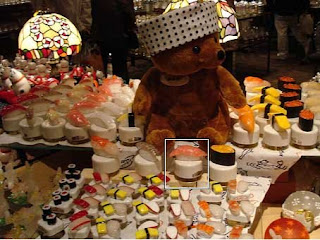 Description
A barrel organ (or roller organ) is a mechanical musical instrument consisting of bellows and one or more ranks of pipes housed in a case, usually of wood, and often highly decorated. The basic principle is the same as a traditional pipe organ, but rather than being played by an organist, the barrel organ is activated either by a person turninga crank, or by clockwork driven by weights or springs. The pieces of music are encoded onto wooden barrels (or cylinders), which in a sense, replace the keyboard of the traditional pipe organ.


Barrel
The pieces of music (or tunes) are encoded onto the barrel using metal pins and staples. Pins are used for short notes, and staples of varying lengths for longer notes. Each barrel usually carried several different tunes. Pinning such barrels was something of an art form, and the quality of the music produced by a barrel organ is largely a function of the quality of its pinning. This complex encoding of music was an early form of programming.
The size of the barrel will depend on the number of notes in the organ and the length of the tune to be played. The more notes, the longer the barrel. The longer the tune, the greater the diameter.

Since the music is hard-coded onto the barrel, the only way for a barrel organ to play a different set of tunes is to replace its barrel with a different one.
The size of the barrel will depend on the number of notes in the organ and the length of the tune to be played. The more notes, the longer the barrel. The longer the tune, the greater the diameter.
מתוך ויקיפדיה
פורסם על ידי ~BS~ ב- 7:47 אין תגובות:

In Zimbabwean music, the mbira is a musical instrument
consisting of a
wooden board to which staggered metal keys have been
attached. It is often
fitted into a deze that functions as a resonator.
Mbira performances are usually
accompanied by hosho. Among the Shona there
are three that are very popular (see
Shona music). The Mbira is usually
classified as part of the lamellophone family
of musical instruments. In
some places it is also known as a
sansa.

The kalimba is an instrument in the percussion family. It is a modernized version of the African mbira. It is a sound box with metal keys attached to the top to give the different notes. Also known as the African Thumb Piano.

The first kalimba to be exported commercially out of Africa was the Hugh Tracey Kalimba. After years of studying African music and dozens of prototype instruments, Hugh Tracey's company African Musical Instruments began manufacturing kalimbas, a western version of the mbira, in the late 1950s. The name kalimba is a Bantu word which means "little music", and is similar to the word karimba, a type of mbira.

While kalimba initially meant the Hugh Tracey kalimba, the name kalimba is now a generic name and can describe any non-traditional thumb piano, or can even be used generically for the traditional lamellophones of Africa (ie, the mbira, karimba, sansa, etc). 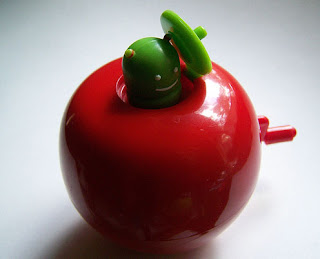 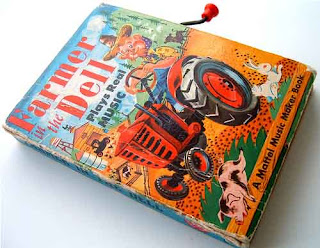 Starting a Music Box Collection
Collectors who wish
to start a music box collection should be aware of the different styles of music
boxes available, as well as how to determine approximately when a music box was
manufactured. This is important because these two factors can help the collector
to determine which music boxes would make an excellent addition to the
collection, and which ones will not exactly fit in with the rest of the
collection. Although the decision to purchase a particular music box is
ultimately up to the collector, a collector can always opt to purchase a music
box based on personal preference even if it doesn’t match the rest of the
collection. However, a music box collection that incorporates a variety of
pieces that complement each other well may be more valuable than a more eclectic
collection.
מתוך: http://sites.pch.com/tips/collectible/collectible-music-boxes.aspx 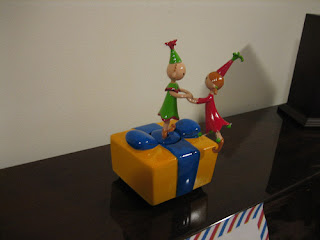 Prior to World War II, the Japanese, not to be outdone,
had developed exquisite clocks enriched with intricate musicals of their own
design.
In 1947, Rokuichi Yamada founded Sankyo Manufacturing
Company, and imitating the Swiss, became the most prominent supplier of musicals
in the east, rivaling the sound and quality of the best in Switzerland.

The music box proper was introduced by Antoine Favre, a
Swiss watchmaker, in 1796, enabling the middle class to dance and enjoy the
popular music of the period in the privacy of their homes. The latter half of
the 19th century rewarded the world with the enchanting melodies of the disc
player, the predecessor of the contemporary phonograph, tapes and discs.

Myth has it that the first music box was designed for the amusement and entertainment of Marie Antoinette. History, on the other hand, reveals the availability of musical clocks constructed in the 16th century for royalty and the wealthy. The musical tones were derived by notching a revolving disc striking a single pin. 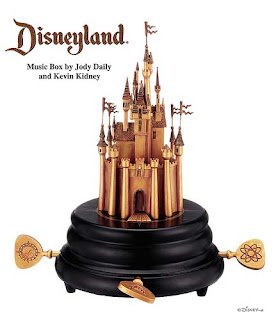 DISNEYLAND MULTI-TUNE MUSIC BOXDisneyland 50th Anniversary CommemorativeDesigned
by Kevin Kidney and Jody DailyMetal, Resin, and Wood.Released in 2005. Limited
Edition. © DisneyThis item was something really special and debuted a new type
of music box that we hoped would catch on with the collectors. It has four tune
movements hidden inside its base, wound by four separate keys. Each key winds up
a different tune representing one of the Magic Kingdom's original
"Lands"...Adventureland: "The Tiki, Tiki, Tiki Room"Frontierland: "The Ballad of
Davy Crockett"Tomorrowland: "Miracles From Molecules" from the 1960s attraction
"Adventure Thru Inner Space"and Fantasyland: a very RARE song written by
composer George Bruns for the Disneyland TV program in the '50s. The tune is
simply titled "Disneyland" and it is the piece of music that played as Walt
first unveiled to the television public his plans to build a magical little park
down in Anaheim.Incidentally...the music sounds pretty psycho if you wind up all
four movements at once! 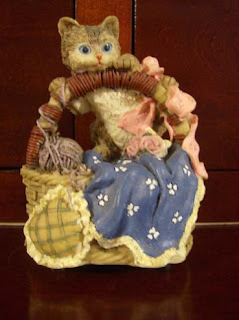 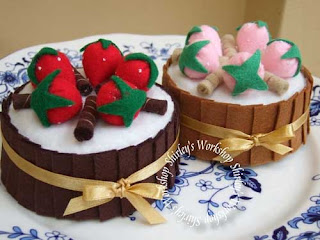 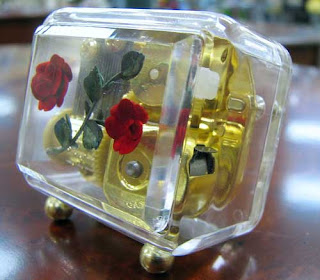 from the comments on the picture:
My Grandmother had several of these exact music boxes... two with red roses, one
with pink... before she died, so this image is incredibly powerful for me. I'm
not sure whatever happened to them... but I adored them as a child. :-) 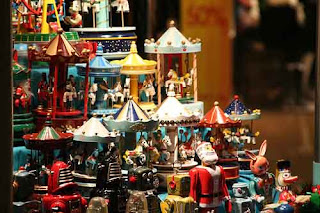 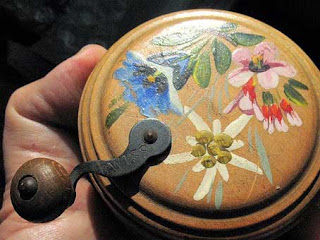 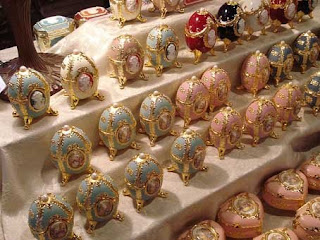 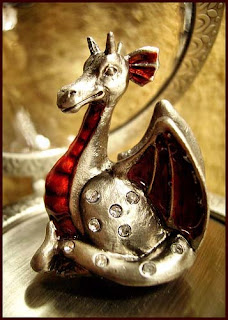 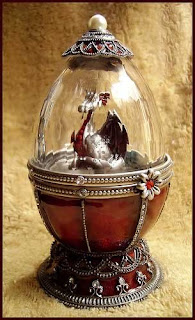 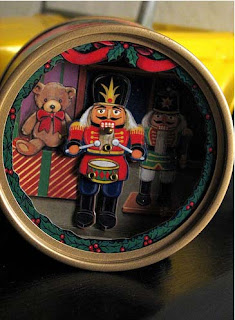 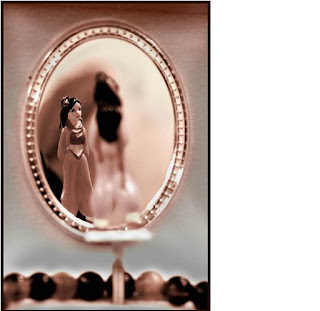 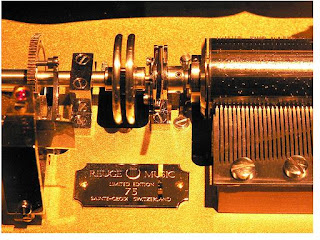 At the clockwork instrument museum in Utrecht

I've had this music box forever. It plays "Greensleeves".Playing with the
lightbox I made yesterday.

The musical boxes could have any size from that of a hat box to a large piece of furniture. Most of them were tabletop specimens though. They were usually powered by clockwork and originally produced by artisan watchmakers. For most of the 19th century, the bulk of musical box production was concentrated in Switzerland, building upon a strong watchmaking tradition. The first musical box factory was opened there in 1815 by Jérémie Recordon and Samuel Junod. There were also a few manufacturers in Bohemia and Germany. By the end of the 19th century, some of the European makers had opened factories in the United States.

The cylinders were normally made of metal and powered by a spring. In some of the costlier models, the cylinders could be removed to change melodies, thanks to an invention by Paillard in 1862, which was perfected by Metert of Geneva in 1879. In some exceptional models, there were four springs, to provide continuous play for up to three hours.


Musical box using the metal disk system: The very first boxes at the end of the 18th century made use of metal disks. The switchover to cylinders seems to have been complete after the Napoleonic wars. In the last decades of the 19th century, however, mass-produced models such as the Polyphon and others all made use of interchangeable metal disks instead of cylinders. The cylinder-based machines rapidly became a minority.


Mechanical piano combined with strings Orchestrion: The term "musical box" is also applied to clockwork devices where a removable metal disk or cylinder was used only in a "programming" function without producing the sounds directly by means of pins and a comb. Instead, the cylinder (or disk) worked by actuating bellows and levers which fed and opened pneumatic valves which activated a modified wind instrument or plucked the chords on a modified string instrument. Some devices could do both at the same time and were often combinations of player pianos and musical boxes, such as the Orchestrion.

At the end of the 19th century and the beginning of the 20th, most musical boxes were gradually replaced by player pianos, which were louder and more versatile and melodious, when kept tuned, and by the smaller gramophones which had the advantage of playing back voices. Escalating labour costs increased the price and further reduced volume. Now modern automation is helping bring music box prices back down.

Collectors prize surviving musical boxes from the 19th century and the early 20th century as well as new music boxes being made today in several countries (see “Evolving Box Production”, below). The cheap, small windup music box movements (including the cylinder and comb and the spring) to add a bit of music to mass-produced jewelry boxes and novelty items are now produced in countries with low labour costs.